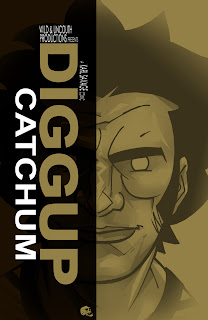 Because I am primarily working on my daunting comic book miniseries while trying desperately to phase out my full time graphics job, I have little to no time left to continue what I was working on before I got the comics gig.

I bought the Collector's Edition DVD of Taxi Driver earlier this week, and loved the design of the dvd case so much that I decided to pay an homage to it with this piece from my "comic book maxi-series on hiatus" Diggup Catchum.

I really like Taxi Driver. It has a place in my heart. It was the film I identified the most with back in 1999. I was the lonely guy living in Altadena, CA while attending Art Center. Fresh out of high school, it was my first time away from home. I bought the film on VHS soon after the move. I identified with Travis Bickle's plight more than I thought I would. I was depressed and homesick, and found myself in socially awkward situations during my time in CA; similar themes that Travis experienced during his downward spiral of self-destruciton.

Fight Club was released shortly after that, and I quickly forgot about Taxi Driver as I became extremely intrigued about the concept of hitting bottom in a way Travis Bickle never did. Now, nearly 10 years later, I'm back out in SoCal, and I own the Collector's DVD and we've connected again. Pretty sweet.

Anyway, I drew the portrait and computer-colored it in about an hour and a half at work. I then finished it at home in illustrator and then voila! Promo completed.

I had a lot of fun hashing this thing out. Eddie's likeness is the closest I've ever drawn of him in comparison to how I see him in my mind's eye. I nailed the level of poofiness of his hair, which has always been a big struggle.

Now back to designing the vehicle that will be featured on the cover to Issue #3...