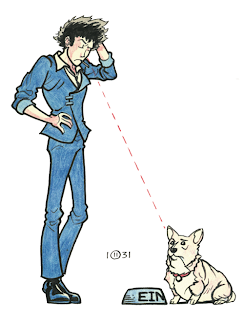 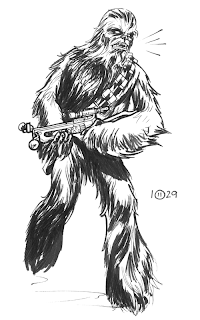 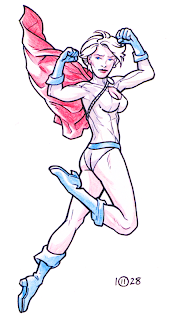 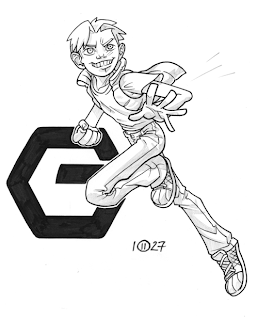 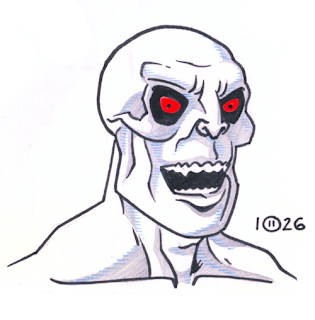 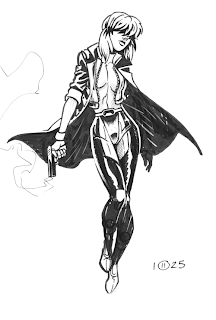 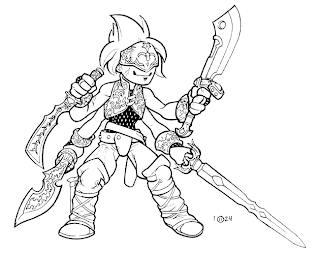 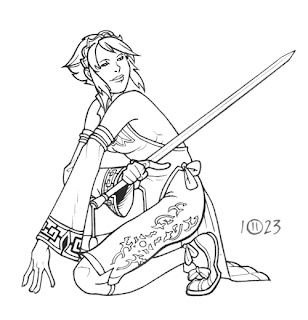 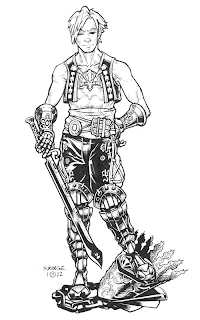 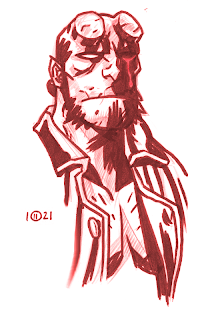 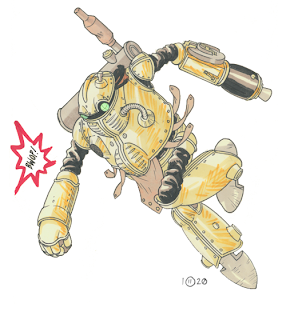 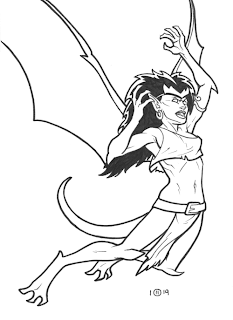 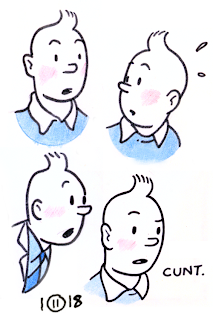 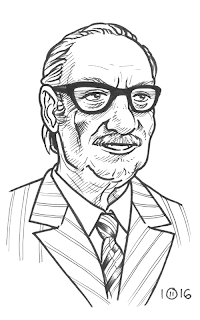 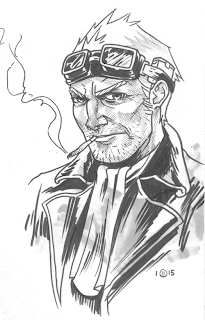 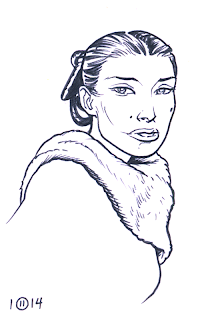 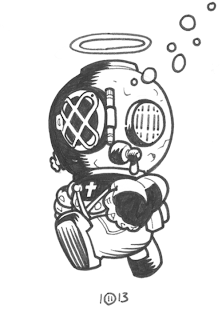 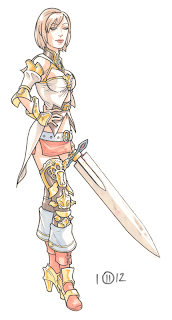 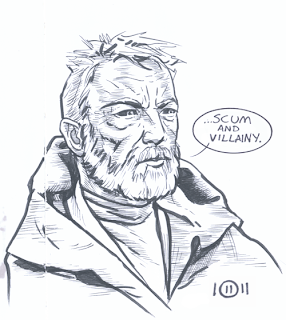 I have really got to start working on my ability to draw likenesses.
No comments: 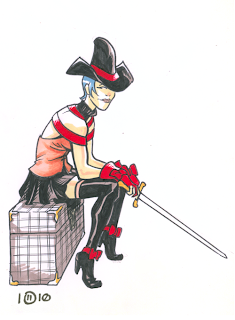 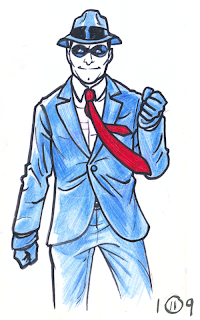 Email ThisBlogThis!Share to TwitterShare to FacebookShare to Pinterest
Labels: comic books, sketch-a-day, the spirit, will eisner 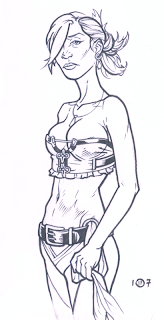 Savonnah the Forlorn.
No comments: 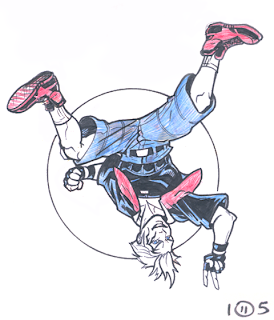 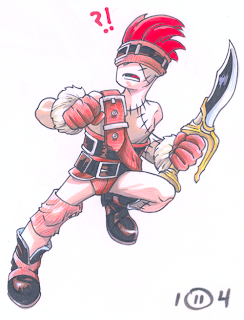 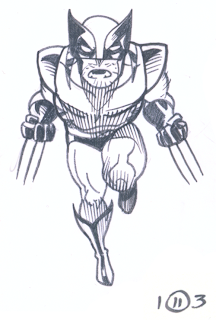 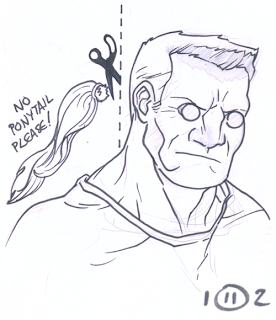 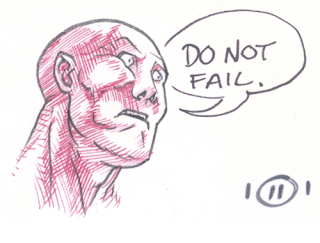 Email ThisBlogThis!Share to TwitterShare to FacebookShare to Pinterest
Labels: sketch-a-day

So another year, another "who fucking cares?"

Wow. Crass. That was crass. It's the beginning of the year, and even by writing about 2011 I'm buying into the bullshit of "starting over" by contributing a journal like many others have posted before me (and with sweeter sentiments), so what am I complaining about really? Most if not all of us counted down aloud or in our mind to midnight as the ball dropped in Times Square with a little "LIVE" in the corner of the tv even though not all of us live on the east coast and so then the "LIVE" is just perplexing and insincere because it's being rebroadcast, so in the end I guess it's pretty much ingrained in our culture that the beginning of the year is a time of resolutions and rebirths and reboots, and I'm no different than anyone else. Oh, I guess it's also the start of a new decade that VH1 will do a show about, asking us if we remember it before it's even fucking over.

Well, what was the 31st of December like? And what was today like? Now just throw in the usual tragedy, disappointment, loss, gain, pleasantness and triumphs (like how I started that with negative things then switched to their positive counterparts?) It's like the Dude said, "Oh, you know, strikes and gutters, ups and downs." Re: Life.

So really we're all excited because the future looks bright because it's not here yet— beating us to a pulp with the weight of all our worries and throwing terribly inconvenient curveballs, all while wearing the drabbest grey because it's the present now— and ultimately it all boils down to the fact that we get to write "11" on our bill payments and our artwork instead of "10", and we're all a little closer to the end. I mean come on, for some this will be their last year; they'll never get to see 2012 and THEN get to find out whether or not the Mayans were full of shit (SPOILER! they were, they are. or not. who cares?). Of course, others will live for many many New Years Eves to come. Strikes = The latter. Gutters = the other thing.

But of course even that isn't an entirely correct sentiment, because really the start of a new year is just like any holiday we observe- it's a time where we concentrate our efforts on one particular aspect of something we should be doing all the time anyway if we knew what was good for us. Christmas = giving. New Years = Bettering ourselves, setting goals and being hopeful and unwavering in our pursuits. We should always be doing these things, not just when the calendar tells us it is time. (But boy, that is tiring, isn't it? If only there were more hours in the day, amirite?). I guess what I'm saying is... fuck tradition?

Ultimately, OF COURSE, I'm a hypocrite (WHO ISN'T?!). Earlier tonight I made a checklist to print out and map my day as an unemployment-insurance-collecting "comic artist." Tradition dictated I do so! What was I supposed to do? NOT observe the notion to try and be less of a lay-about piece of shit? Oh, I'm all over that with tasks like "exercise" and "read" and "go for a walk" and "smoke less" and "job hunt more" and "how about some sit ups" and all that shit. "Draw more. Like CRAZY more, because seriously, what are you doing?" I have no idea. Talking to myself? Talking to myself.