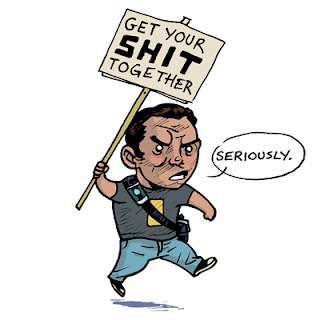 Well, this year was kind of a bust. Thursday was wasted running around helping my friend out with a very disorganized panel he was only supposed to be speaking on, but instead was unceremoniously christened it's de facto go-to guy. The people in charge were super-busy with other projects and just threw a lot of the responsibility on my friend, whose phone died pretty much out of the gate. So I was christened the surrogate phone guy. It took ALL DAY. Ridiculous.
Friday and Saturday weren't much better. My feet started killing me after Thursday's panicked panel preposterousness, and I was permanently exhausted for the rest of the weekend because I foolishly dared to wake up early each day to see if I could get into any of the movie panels.  I was disheartened to find that the lines formed earlier and were longer than anything I had encountered in the past five years I've gone. So what wound up happening was me up with nothing to do but walk.
I went to a panel with Scott McLeod, which was encouraging. I drew this above sketch while at that panel. That evening I went to the Eisner Awards for the first time, which was also encouraging. Plus, Popgun Vol. 3 won Best Anthology! Yay!
Saturday was the day I was up and in the line for the dreaded Hall H by 6:30am in an attempt to see the Suckerpunch/Green Lantern/Harry Potter panel with new footage. The panel started at 11:45am. I won't go into detail, but it involves every person in line is actually holding a spot for 3+ of their friends who show up later and cut ahead, not being able to go from sitting indian-legged to stretching my legs out in front of me, my friend not showing up to join me in my misery, feeling more and more like human cattle, and finally after an hour and 45 minutes of this deciding it is in no way fun OR worth it, and stepping out of line permanently just in time for my friend to show up with some coffee.
Why do people subject themselves to this? Sneak peeks are NOT that special. The trailer for SuckerPunch is online RIGHT NOW. Why would anyone waste 6+ hours of their time, or worse, CAMP OVERNIGHT in a sleeping bag, to be first to see this shit mere days before everyone else does? It makes no sense. I mistakenly attempted this because of the principle of the crowds and Hall H not DEFEATING ME, but I quickly realized that this was crazy, and I had no qualms with quitting my misguided mission.
Anyway, the end of the day consisted of waiting in yet another HUGE line for the train to come (with a shitload of extra cars attached to it to handle the amount of people waiting to return home) and whisk me back to Irvine to pick up my car and drive home.
I didn't network for shit. I didn't show my portfolio to anybody. I left the con angry with it and myself, but overall I did take away some inspiration to get back to work at my art desk, which is where I'm going as soon as I post this.
I really don't think I'll attend next year unless I actually have business going on beforehand. Walking around not as a professional, and yet not as a costume-clad fanboy— just some schmuck in flux— is getting tiresome.
-K
No comments: 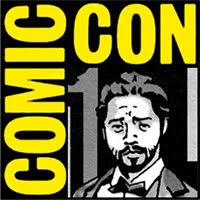 SDCC is like The Island and I'm Jack Shepherd. "WE HAVE TO GO BACK!"
After planning on not going to San Diego Comic Con and telling myself over and over that I'm flat broke, unemployed, and that this year just wasn't happening, I am now going to SDCC.
My friend is speaking on a panel, and has a 4-Day Guest Pass. His guest backed out at the last minute so he decided to put the screws to me, and demanded I go. The only catch was I can't stay with him due to the fact he's staying at a hostel, and I have no money.
I decided I'd only go three days (Thur-Sat) to make the trek financially feasible. My parents were nice enough to pay for my train ticket and share of the hotel room, which a school friend is allowing me to stay in for Thursday and Friday, and now I'm going.

Today I updated my portfolio with some recent narrative pages I've drawn, then I printed out some new home-made business cards. I've never had money to actually sit down, design, and send off a nice, official-looking card for mass production, so instead I print them off my computer onto bristol board, then I slice them up with a ruler and an x-acto knife. 3 cheers for ghetto bizniz cards.

All energy flows according to the whims of the great magnet. What a fool I was to defy it.
So ridiculous. 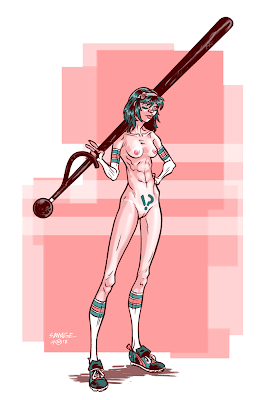 Went a little more cartoony with this one. Those are some gazelle legs or something.
No comments:

Email ThisBlogThis!Share to TwitterShare to FacebookShare to Pinterest
Labels: interrobanger 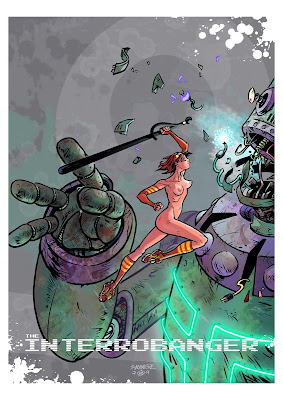 Went a little overboard with this one, and that's fine by me.
UPDATE. Decided to do a variant with her color scheme from Week 2. 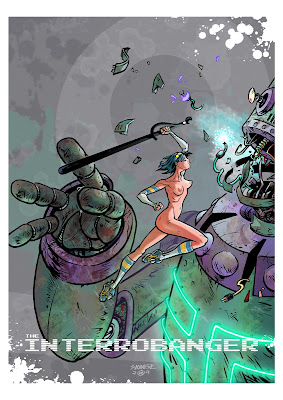