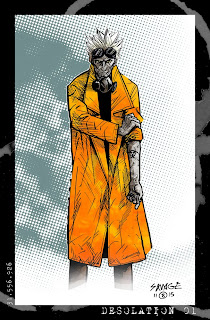 Desolation Jones.
He is the titular character of his own comic book series.
He was created by Warren Ellis (writer) and J.H. Williams III (artist).
Great read. Brilliant art.
I did this piece super-quick for a "Warren Ellis" jam over on deviantART. (same as the B.P.R.D. and Invincible jams).
This was the last thing I was tied down to do that could interrupt my narrative work.
I wish he could be doing something a bit more dynamic, but the layout Jesse drew up was pretty much a shot of him standing there, and I didn't really want to deviate from that.
Oh, YES.
I made a biohazard symbol in photoshop out of a coffee mug stain!
That's the grayish discoloration around the border.
I thought that was a nice little thing to do.
oooh! How CLEVER!!!
*swoons*