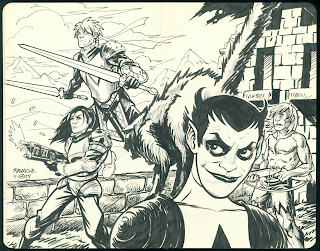 Three years ago when I first moved to CA and was living with my sister in Long Beach I wrote down a bunch of characters' names on slips of paper and put them in a bowl. I would have my sister pull one out and I drew and colored whatever random character she picked. I drew three and stopped. The slips of paper have sat in an ashtray ever since then.
I've been having artist's block(?) lately, so today I grabbed four slips of paper and drew whatever characters I picked into my moleskin with one thing in mind- Don't worry about it. Make it work.
The four characters in this instance actually gel together pretty well. I've already picked the next four, and they're a little more of an eclectic bunch (UNDERSTATEMENT). So yes, I'll be doing more of these.
From left to right: Laguna Loire (Final Fantasy VIII), Glenn (Chrono Cross), Teekl & Klarion (DC) and Kamandi (DC).