The Incredible League of America Week 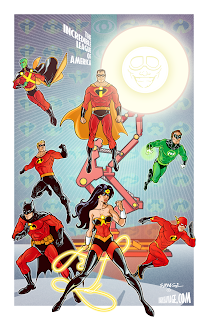 Doing a sketch a day, I was just supposed to be drawing the Justice League of America. But after I drew
Freakazoid! two weeks ago in that Incredibles costume, I decided I would do this 'What If...'

What if the JLA joined the Incredibles? Namely, what would it look like trying to wrangle all the JLAers into a specific uniform costume template, like the Incredibles or the Fantastic Four wear?

I tried to include aspects of their individual costumes that are integral to the characters. Batman still needs his cape, cowl and belt. Green Lantern's ring can only create a black, green and white uniform for the wearer. Plastic Man also has color restrictions. Martian Manhunter doesn't need a mask because he's a big green Martian, Wonder Woman needs her bracelets and tiara, etc.

It was a great deal of fun.
Anyway, moving on to 70's Marvel superheroes...