It's coming up on one year now since a comic book project was (seriously) thrown in my lap, and this past year has been quite a doozy. I've betrayed my goals over and over again; being out of practice and not wanting to draw, then being really slow at producing, then blaming my job for all my problems with organization and time management, etc., when really what I needed to be doing was working around my job and making every spare minute count. 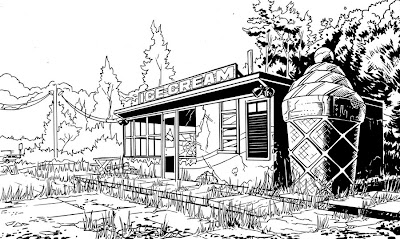 But as I completed each page of art I became happier with what I was doing in general. Each finished page was accompanied by an incredible high which would then slowly level out and then dip down into negative feelings as I held my progress and conduct under extreme scrutiny. Yeah, I liked what I had just drawn, but now I needed to work on another page! And I'm so slow, and oh, the mistakes I've made. I should eat healthier. And how about some exercise? Oh no, I'm in the muck again! I have to start over.

It's been nearly impossible to get my head screwed on right. This behavior pattern has gotten under my skin over and over again. The consequences have been long, unacceptable breaks between pages, and I've teemed to the brim with a LOT of anxiety.

Then, in the middle of this, of all the things that could happen, I got cancer, which was just... weird.

I know it has effected me. Definitely. But to what extent I'm not sure. I feel like me. But I have such a bad memory and can be so short-sighted that I'm not sure I'm behaving the same way. I've gotten angrier. I know that. I lose my shit while driving home from work almost every other day. I've never done that before.

Cancer can be a great excuse. It continues to excuse me from a lot of obligations, whether I want it to or not. If people think you have/had cancer then they won't give you crap about being a few minutes (to an hour) late to work. "Yeah, I'm late to work. I'm fighting cancer." "Oh! I'm terribly sorry. Let me excuse myself in a very awkward, Monty-Python-esque sort of way. Carry on..."

I had intended to use cancer as my motivation to not waste my life and accomplish some goals already! Instead I totally succumbed to its machinations; tired and angry all the time.Countless times I have thanked my lucky stars that I haven't needed any further treatment besides Observation, that the surgery did the trick. The cancer had not spread to my lymph nodes and I only had to lose one testicle. I know how lucky I was. At one point though, before a treatment had been decided, I thought about how a perk of needing chemo would be the way it would waste me away, losing some of my unwanted weight- I could be all bones! Gallows humor. Sure. You prepare yourself for the worst and try to look at it from the bright side. But I also interpreted these thoughts as the perfect example of the pathetic lethargy and utter contempt I had for myself and the hand I had been dealt, folding over and over again when I kept getting pocket Aces.

I am pretty sure that the only good thing that can come out of having cancer is coming to peace with your lot in life, accepting your mortality, and allowing yourself to open your eyes and accept the world as it comes; making changes to your life accordingly. I'm a survivor, and I was extremely lucky. Now can I let myself go kick some ass, please? How many times must I hit bottom? I think Fight Club fucked me up.

As I come out the other side and start regaining some semblance of normality I have realized that I haven't taken advantage of my time. I've been a terrible influence on my own dreams and aspirations. Year one of me "working" in comics is ending. I want something to show for it and I know I haven't accomplished much- at least, nothing tangible. So I can not concern myself with tangibility right now. There is nothing there to touch. As a whole, I will have to settle for a lesson learned.

Starting here and now I will not waste another year, and especially this year. This year is going to be goddamn EPIC. I will hold an inked, colored, lettered, printed comic book BY me, IN my hands by this time next year. Cancer-free, in shape.

The image above is the first panel of Page 17, Issue #1. I look forward to seeing what it means in context to all the other panels before and after it.

P.S. I did quit smoking this year. That's a small triumph.