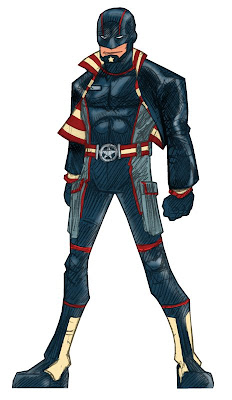 I dare you to try and create an original superhero costume with an American flag theme. It's flippin'-near impossible.

Before I drew this costume, I frustratingly drew over 40 other renditions of an American flag costume. More often than not, my designs would echo a design already put to paper; from Captain America to the Fighting American, from SuperPatriot (pre- and post-disfigurement) to StarGirl, and not to mention all three heroes called 'Patriot' (2 from Marvel, 1 from JMS's 'Rising Stars') - I could not tap into an original idea. I also wanted my design to be subtle and covert, which is ridiculous because American Flag-themed costumes are flamboyant by nature. It's a FLAG!

The process of shifting gears was slow. I had to push through all the crap I didn't want before I could identify what it was I did want. I found myself gravitating towards non-patriotic costume ideas. Then I started researching real-life flag fashions.

For this design, I took my visual cues from Wildstorm's "Midnighter," Tom Grummett's Superboy (circa the Death and Return of Superman), and then I re-appropriated the liner from Bono's Super Bowl XXXVII half-time show jacket.

I chose to use the color scheme of Shepard Fairey's Obama portrait instead of the red, white and blue of the American flag itself simply because they are skewed primary colors, and are fairly muted. Due to the popularity of Mr. Fairey's piece, these colors seem to be more commonly associated with the United States flag palette, which was perfect for what I was going for with my America-themed hero.

Overall, I'm pretty happy with the whole package, but MAN. This design a pain in the ass.

I drifted through and looked at your art work (awesome). It seems as though you have the sort of job every artist dreams of.