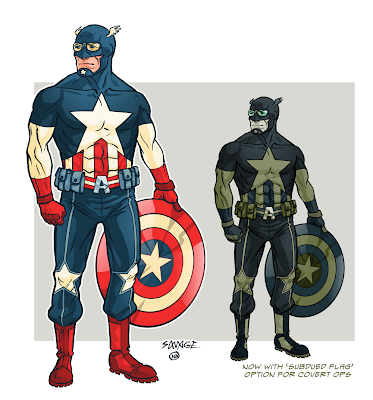 This is my entry for Project Rooftop's Captain America: Fighting Styles redesign contest.
From PR:
...Captain America is a symbol as well as a warrior, and should represent America's best ideals, even when others in power fall short of his moral standards... ...It is important to keep in mind that the task is not to re-imagine the characters, but to revise ONLY their costuming, as if it is to be used in current continuity. Always try to create a better costume than the design currently in use, not just a variant.
My original idea was to just do a 'Subdued Flag' version of Cap; just do regular Cap, but color him in army greens, blacks, and whites. But I realized that if I didn't do the red, white and blue, I would probably blow any shot I have at being realistically considered by the judges for the contest.
So then I had to actually design him. UGH. Cap's costume is SO ICONIC— SO many existing superhero staples were so well-established and fine-tuned with this costume, it's really the template for all superhero costumes. Plus, it's the American Flag, of which COUNTLESS heros have been designed around. Here's a sampling- The Shield, Super-Patriot (pre- and post-injuries), U.S. Agent, Fighting American, Patriot (Young Avengers), Uncle Sam, Star Girl, Wonder Woman, Reuben Flagg, Captain Glory, American Son, Star, The Comedian, Patriot (Rising Stars), Ultimate Captain America, Major Glory, The Spirit of '76, Battlestar, American Maid, Iron Patriot, Star Spangled, Reagan's Raiders, Mr. America, Commander Capitalism, Evel Knievel... the list goes on (and on and on. don't even get me started on the Timely Comics' old WWII-era heroes. Throw a rock and you'll hit stars and stripes).
Here's how I went about this endeavor.


The A on his forehead has always troubled me. I've always thought it was a great spot for snipers to aim. I knew I wanted to rid him of that. The wings came and went multiple times until I finally decided that Cap's silhouette is better served by keeping them. I turned the 'A' from his head into his belt buckle, then made it an Avengers 'A' since he's now being toted as "The First Avenger."
Then to actually add elements to his costume, I threw some stars on his knees because I thought about Cap kneeing nazis or terrorists in the face and them literally seeing stars (hyuk hyuk hyuk). As invincible as he is, I gave him protective eye-wear with night-vision technology. I don't know how well his eyes can resist toxic gasses, but I know FOR A FACT he can't see in the dark. So there.
Then I extended his mask to protect his nose and chin. Pouches on his belt for keeping stuff in. Maybe he carries a copy of Ernie Pyle's "Brave Men" around with him for inspiration. I don't know! I also got rid of the buccaneer boots and gloves and replaced them with more streamlined regular boots and gloves so he can run at you and punch your lights out with less wind resistance.
I knew I didn't want to mess with the shield at all. I have SO much respect for that roundel (I love roundels because I love circles). Plus, the shield's pretty permanent. It's made of VIBRANIUM, fer chrissakes. *pushes up glasses*
THEN. After ALL THAT. I finally made my "Subdued Flag" variant. Like he presses a button or something and SHAZAM! His costume, made of unstable molecules for sure (because MARVEL), turns into a covert, less-easily-to-spot-and-shoot-at color. In case you're not aware of the terminology, our soldiers don't go running around in combat zones with bright red, white and blue flags on their arms. They wear what are called "subdued" patches. Usually two or three colors are used, usually camo-themed to blend in with the rest of their uniform. The American flag patch is usually black in place of blue and red, and green in place of the white stripes and stars.
In the end, I'm so-so on my design. It's more of a variant. But it was a lot of fun!

P.S. I've gone through the pain of designing a patriotic superhero before for the Sidekicked book that never saw print. That design can be found here. I actually borrowed a little bit of his helmet for my Cap redesign. Needless to say, I was happy I didn't have to start from scratch this time around! I drew nearly 50 drawings of the Sidekicked character before I had something that worked for me.